Analysing the US sector balances shows not only a huge budget deficit but unprecedented and equally problematic corporate and overseas surpluses.

The surpluses or deficits of a national economy’s four sectors – households, businesses, government and rest of the world – add up to zero by definition.  Since an excess of spending relative to income in one sector is inevitably matched by a combined shortfall of spending relative to income in the other three, it is quite wrong to see surpluses as good and deficits as bad – or vice-versa.  But that does not mean it does not matter which sectors are in surplus.

In a healthy economy, businesses invest using money borrowed from households who are saving for future consumption.  In the ideal world, this business sector deficit and household sector surplus are accompanied by net exports (a deficit for the rest of the world) and a small government deficit (to fund its own investment).

Figure 1 charts the course of the four sector balances within the US economy from the mid 1960s when this data was first published.  The nearly fifty years shown are divided into six periods.  During the first (Period 1), up to 1974, the US was in this ideal world, experiencing a combination of both investment-led and export-led growth. 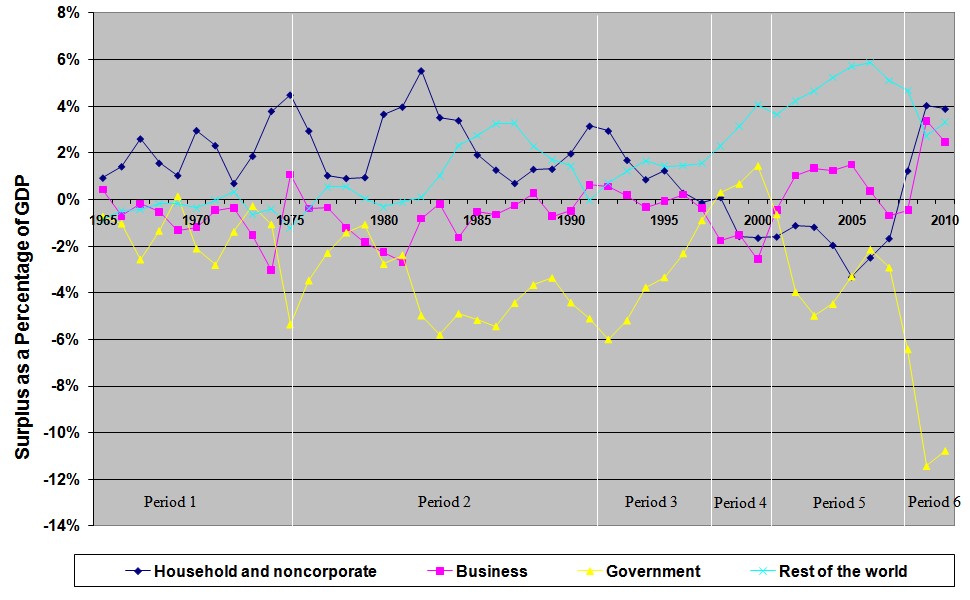 The second period begins with the ending of the post war boom in the United States and the 1973 oil crisis, which were associated with a stock market crash. This resulted in only a brief period of saving by business (1975) before a return to the natural policy of borrowing (deficit). The Government deficit increases in response but returned to a more normal level between 1977-81.

President Reagan’s expansionary fiscal policy in the 80s and a fall in household saving were associated with an increase in the rest of the world’s surplus.  With the exception of 1991, 1980 is the last year that the rest of the world was in deficit with the US economy.  This second period, between 1974 and 1992, therefore marks the end of export lead growth within the US economy.  Business investment continued to drive growth between 1980 and 1991.

In the early part of the third period, during the early Clinton years (1993-1997) the Government cut the deficit from 6% to zero.  This was associated with a fall in household saving.  The business surplus remained close to zero while the rest of the world rose slightly.

The later Clinton years (Period 4) coincided with the dot-com bubble.  Households started to borrow as did businesses.  The Government recorded a budget surplus (the first since 1969) and the rest of the world surplus increased further. At this point households started to become the engine of the economy, borrowing from countries with high savings rates (e.g. China and  Japan).

Following the bursting of the bubble in late 2000 (Period 5) the Government spiralled into deficit and businesses moved into surplus to repair their balance sheets. Households were still in deficit as the tax cuts and spending increases enacted under President Bush increased incomes. The rest of the world surplus rose further, to record levels.  The business sector surplus and the household sector deficit were also at record levels in 2005.

In the two following years, just before the financial crisis struck, all four sector balances had started to move away from their previous record levels, in the direction of, but still a long way from, the ideal economy of the pre-1974 period..

The crash (Period 6) and the associated recession obliterated this gentle recovery.  Both households and businesses moved sharply into surplus – businesses to a record extent and households to an extent not seen the since the early 1980s.  While the overseas surplus fell slightly, it was the plunging government deficit that took the strain.  Although the pattern of government deficit and household, business and rest of the world surplus is not quite unprecedented (1992 being the one other occasion), the scale of the imbalances in 2010 most certainly is.

Calls for reductions in the government deficit which do not specify how the other sectors are expected to adjust – and with what consequences are one-sided and incomplete.

This piece shows a similar analyis of UK sector balances